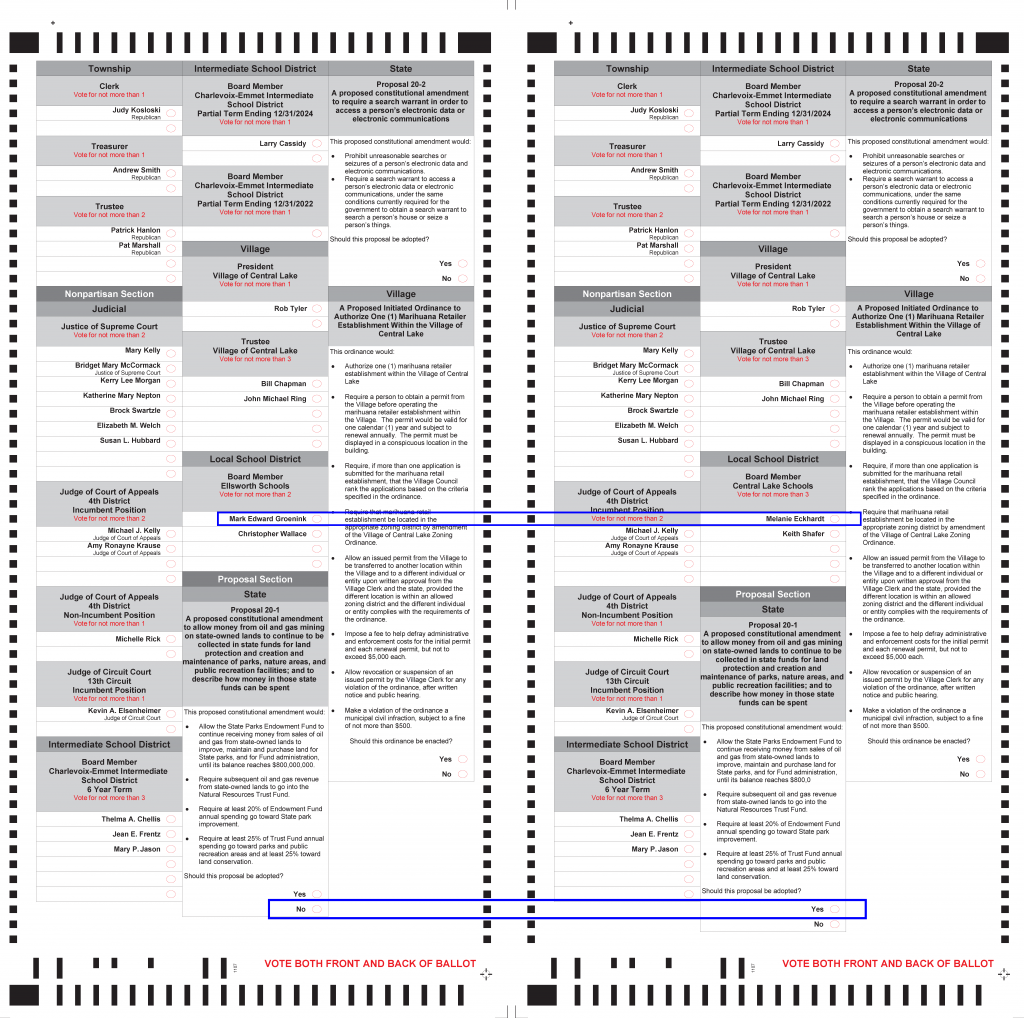 Preliminary unofficial election results posted at 4am after the November 3rd 2020 election, by election administrators in Antrim County Michigan, were incorrect by thousands of votes–in the Presidential race and in local races. Within days, Antrim County election administrators corrected the error, as confirmed by a full hand recount of the ballots, but everyone wondered: what went wrong? Were the voting machines hacked?

The Michigan Secretary of State and the Michigan Attorney General commissioned an expert to conduct a forensic examination. Fortunately for Michigan, one of the world’s leading experts on voting machines and election cybersecurity is a professor at the University of Michigan: J. Alex Halderman. Professor Halderman submitted his report to the State on March 26, 2021 and the State has released the report.

And here’s what Professor Halderman found: “In October, Antrim changed three ballot designs to correct local contests after the initial designs had already been loaded onto the memory cards that configure the ballot scanners. … [A]ll memory cards should have been updated following the changes. Antrim used the new designs in its election management system and updated the memory cards for one affected township, but it did not update the memory cards for any other scanners.”

Here’s what that means: Optical-scan voting machines don’t (generally) read the text of the candidates’ names, they look for an oval filled in at a specific position on the page. The Ballot Definition File tells the voting machine what name corresponds to what position. And also informs the election-management system (EMS) that runs on the county’s election management computers how to interpret the memory cards that transfer results from the voting machines to the central computers.

Shown here at left is the original ballot layout, and at right is the new ballot layout. I have added the blue rectangles to explain Professor Halderman’s report.

Now, if the voting machine is loaded with a memory card with the ballot definition at left, but fed ballots in the format at right, what will happen?

A voter’s mark next to the name “Melanie Eckhart” will be interpreted as a vote for “Mark Edward Groenink”. That is, in the first blue rectangle, you can see that the oval at that same ballot position is interpreted differently, in the two different ballot layouts.

A voter’s mark next to “Yes” in Proposal 20-1 will be interpreted as “No” (as you can see by looking at the second blue rectangle).

We’d expect that problem with any bubble-ballot voting system (though there are ways of preventing it, see below). But the Dominion’s results-file format makes the problem far worse.

In Dominion’s file format for storing the results, every subsequent oval on the paper is given a sequential ID number, cumulative across all ballot styles used in the county. Now look at the figure above, just below the first blue rectangle. You’ll see that in the original “Local School District” race (at left) there are two write-in bubbles, but in the revised “Local School District” race (at right), there are three write-in bubbles. That means the ID number of every subsequent bubble, on this ballot and in all the ballot styles that come after it in this county, the ID numbers will be off by one. Figure 2 of the report illustrates:

But not every contest was recounted by hand. The expert analysis finds a few contests where the reported vote totals are still incorrect; and in one of those contests (a marijuana ballot question) the outcome of the election was affected.

In the court case of Bailey v. Antrim, plaintiffs had submitted a report (December 13, 2020) from one Russell J. Ramsland making many claims about the Dominion voting machines and their use in Antrim County: adjudication, error rates, log entries, software updates, Venezuela. Section 5 of Professor Halderman’s report addresses all of these claims and finds them unsupported by the evidence.

What can we learn from all of this?

And what can we learn about election administration in general?

Phishing Attack: Clinic Says 450,000 May Have Been Affected