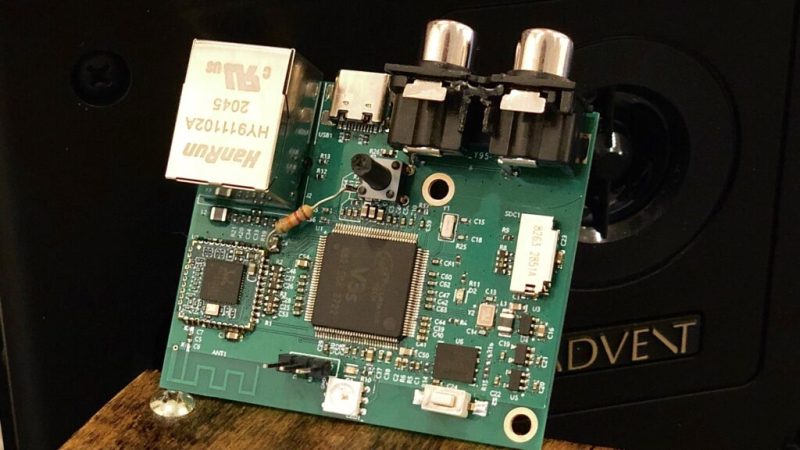 If you want to hook up an existing stereo or amplifier to Spotify, there’s a fair few options on the market. You can even just order a Raspberry Pi and be done with it. [Evan Hailey] went his own way, however, and built his own Spotify Box from scratch.

Housed inside a tidy little wooden enclosure of his own creation, the Spotify Box can turn any amplifier into a remote-controlled Spotify player via Spotify Connect. Pick the songs on your smartphone, and they’ll play from the Spotify Box as simple as that.

The project is based on the Allwinner V3S, a system-on-chip with a 1.2GHz ARM-Cortex-A7 core, 64MB of DDR2 RAM, and an Ethernet transceiver for good measure. There’s also a high-quality audio codec built in, making it perfect for this application. It’s thrown onto a four-layer PCB of [Evan’s] own design, and paired with a Wi-Fi and BlueTooth transceiver, RJ-45 and RCA jacks, a push-button and some LEDs. There’s also an SD card for storage.

With a custom Linux install brewed up using Buildroot, [Evan] was able to get a barebones system running Spotifyd while communicating with the network. With that done, it was as simple as hooking up the Spotify Box to an amp and grooving out to some tunes.

Along the way, [Evan] learned all about compiling drivers and working with embedded Linux, as well as how to take a bare SoC and build it into a fully-functional single-board computer. When someone else says they “made” a Spotify player, he presumably gets to clear his throat.

If you fancy retro computers, consider interfacing Spotify with your classic Mac instead!

[Thanks to Jay Carlson for the tip!]

Is a Diode a Switch?