The Anatomy of an Attack Against a Cloud Supply Pipeline 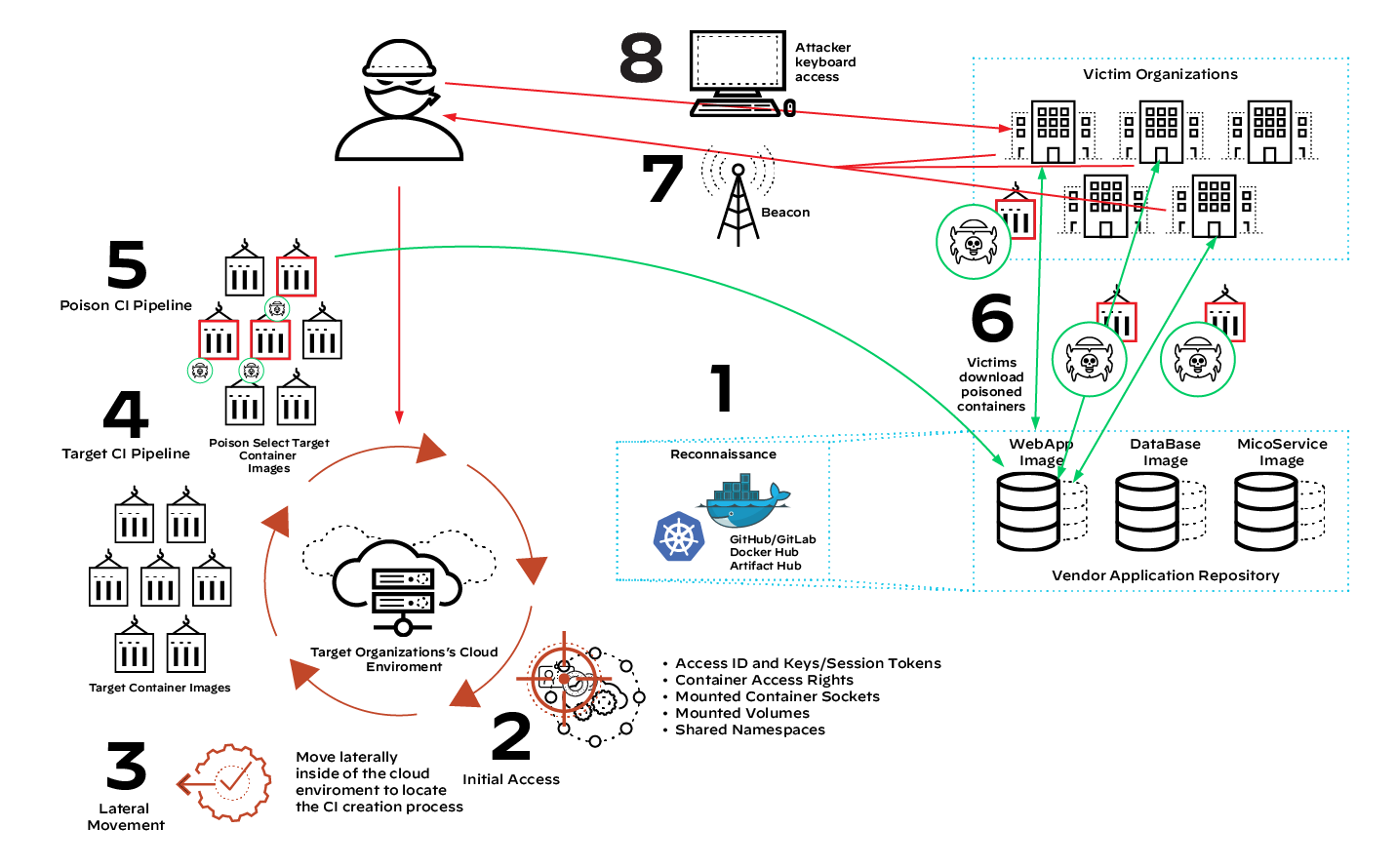 The most recent Unit 42 Cloud Threat Report contains the high-level results of a red team exercise performed against a SaaS customer’s continuous integration and continuous development (CI/CD) pipeline. In other words, a customer asked our researchers to think like attackers, with the aim of revealing vulnerabilities and misconfigurations in their development operations (DevOps) processes. During the red team exercise, researchers took guidance from the strategies and techniques used by the attackers behind the SolarWinds Orion supply chain attack, in order to emulate a real-world threat and assess the security practices against known attacker techniques. The researchers posed as insider threats with the intent of gaining sufficient access to modify components of the CI/CD pipeline, resulting in a potential supply chain attack.

Researchers were able to achieve administrator access, aka “God Mode,” within the organization’s cloud environment due to the hardcoding of 26 identity and access management (IAM) key pairs being stored within an internal GitLab repository. (IAM key pairs are a set of security credentials – a public key and a private key – that can be used to prove identity when connecting to a public cloud instance. Since these are literally keys to a cloud environment, access to them should be safeguarded, especially if they correspond to privileged roles.)

In the case of the SaaS customer, every repository within the GitLab environment was accessible to any of the organization’s developer accounts. Some of the key pairs stored in the GitLab repository allowed researchers to escalate their permissions within the organization’s cloud environment to the extent that they would be capable of compromising the CI/CD pipeline, potentially resulting in hundreds, if not thousands, of downstream clients being affected.

Only one out of more than 50 total AWS accounts identified by the researchers was being monitored by Amazon GuardDuty (an AWS security tool that continuously monitors configured AWS accounts for malicious activity) and the Prisma Cloud platform. The organization did not have these security measures enabled on their other 49+ AWS accounts. Luckily, the organization’s security operations center (SOC) was able to detect a portion of the researchers’ actions through that one monitored AWS cloud account.

We are keenly aware of recent real-world supply chain attacks such as SolarStorm, the attack on SolarWinds, which targeted a SaaS provider’s CI/CD pipeline and compromised thousands of downstream clients. Given that we have seen major attacks of this nature in the wild, the findings from this red team exercise are significant and should be conveyed to all organizations that operate a CI/CD architecture.

The following sections will give readers insight into how a supply chain attack targeting a cloud-based SaaS provider could be carried out. By outlining the strategies and techniques Unit 42 researchers performed during their own red team exercise (as was described within the Cloud Threat Report), and which was itself modeled in part on the SolarWinds supply chain attack, this hopefully gives readers and architects of cloud-based CI/CD pipelines a view into how their own pipelines can be targeted and mined for sensitive information leading to the compromise of their environments. After the description of the attack, the final section provides guidance for how to mitigate attacks on the CI/CD pipeline.

In the red team exercise, our researchers showed they could compromise the customer’s CI/CD pipeline – but what exactly does that mean? What happens behind the scenes when a vendor’s supply chain, or its CI/CD pipeline, is compromised? To answer this question, let us first understand why CI/CD pipeline development channels are considered the industry standard.

This brings us to malicious attackers. Some attackers deliberately target SaaS vendors with the specific mission of compromising that vendor’s CI/CD pipeline to insert malicious code into a portion of the application’s containerized ecosystem. Figure 1 illustrates an eight-step operation an attacker could use to compromise a SaaS vendor’s CI/CD pipeline and ultimately gain a foothold in the vendor’s cloud environment and what’s worse, use that vendor’s environment to send poisoned applications or plugins to downstream organizations resulting in the exponential growth of compromised victim environments, as was seen within the fallout of the SolarWinds attack.

First, attackers need to identify how an organization operates. Attackers will find and then scan any known Infrastructure as Code (IaC) repositories associated with the customer and any employees who work for them. Common IaC repositories are GitLab/GitHub, ArtifactHub, Docker Hub, Quay, Google Container Registry (GCR) and Amazon Elastic Container Registry (ECR). Each of these registries, either internal or external, can contain information that can be used during an offensive operation. During the red team exercise carried out by the Unit 42 researchers, we were able to uncover 26 hardcoded AWS IAM access IDs and their associated key pair or session token. While most of the key pairs were inactive, there were some that allowed the researchers to gain access to the cloud environment. Properly securing IAM credentials is a key concern for organizations as Unit 42 researchers have also found significant increases in the number of cloud environments not implementing secure IAM configurations.

The attackers will attempt to gain access to the vendor’s cloud infrastructure by leveraging weaknesses in the vendor’s known cloud infrastructure. Or – as was the case with the red team exercise – attackers may take advantage of an easier way in. In the red team exercise, the researchers were able to simply log into the cloud environment using the hardcoded IAM access key pairs identified during the reconnaissance phase. Initial access will traditionally include leveraging misconfigurations within the vendor’s IaC templates, or vulnerabilities within the cloud-hosted applications and containers.

Once attackers have gained access to a cloud-hosted system, they will begin the process of expanding that access by attempting to locate the organization’s CI pipeline. Lateral movement within a cloud environment is similar to lateral movement within a traditional on-prem infrastructure, aside from the presence of container escape operations. For these operations, instead of moving laterally to physically separate systems, the attacker is moving between a virtual system and the physical system hosting that virtual system.

During a container escape, the attacker will attempt to move laterally from the container process to the container host system, allowing them additional privileges making future operations both possible and easier. For example, this could mean moving from a public-facing web server process running within a Kubernetes (k8s) cluster to the system which is hosting that k8s container. The escape technique used depends upon several factors, such as misconfigurations or vulnerabilities within the k8s cluster, but it could include leveraging shared volumes, libraries or namespaces between the host and the container, or it could involve taking advantage of overprivileged container rights. Additionally, the container itself may host IAM key pairs which could allow the attacker to simply log directly into the cloud platform hosting the cloud systems. By either escaping the container, discovering IAM key pairs or connecting to other containers within the same hosting machine, attackers can move laterally and discover new cloud infrastructure.

Through this process, attackers can find their way to the CI pipeline.

Once attackers locate the organization’s CI pipeline, they will need to acquire access to the CI pipeline management service. Similar to step 3’s lateral movement operations, this will require one of the following approaches:

The attackers now have access to the CI pipeline and can affect it in various ways, including “poisoning” components of the SaaS application. A poisoned component can be used to perform malicious actions such as building backdoor functionality into one or more of the application’s components, allowing attackers to enter downstream client environments. In the case of the SolarWinds attack, the attackers built a malicious backdoor into the networking plug-in module for the Orion application. By building network connectivity operations into the application’s components, attackers have an opportunity to integrate their malicious code into the vendor’s official application packaging. In the case of the SolarWinds attack, the attackers were even able to sign their malicious package with a legitimate digital signature, which further masked their malicious content. The poisoned package is then made available to the vendor’s customer base, and all the attackers need to do is wait.

The poisoned package is downloaded by a client. Since the customer is likely to perceive it as legitimate, the customer will build that package into their cloud or on-prem infrastructure – giving attackers the access they’ve been working toward.

These eight steps show how, from a seemingly innocuous mistake such as insecure storage of IAM key pairs, attackers can build to a far-reaching attack on the cloud infrastructures of many organizations.

Unit 42 researchers took the SolarWinds Orion compromise as the north star when designing our red team operation. Understanding how the attackers successfully performed that attack informed how the researchers performed our operation – demonstrating how a SaaS vendor’s CI/CD pipeline can be compromised. A compromise of this nature could ultimately lead to tens of thousands of downstream organizations unwittingly becoming the recipient of malicious backdoors into their environments.

To offer an illustration of how, starting by compromising one SaaS vendor, attackers could compromise at least 18,000 unique organizations, see Figure 2. This lays out a model for an exponential growth pattern, following the steps described above, through which a malicious modification of a single SaaS vendor can spread to downstream organizations.

The attack on SolarWinds can be viewed through the lens of this model. On Dec. 13, 2020, FireEye released information related to a breach and data exfiltration originating from an unknown actor FireEye called UNC2452. Unit 42 researchers tracked this event and related activity and labeled the group SolarStorm. Unit 42 published the observed techniques, indicators of compromise (IoCs) and relevant courses of action in the Unit 42 ATOM Viewer. According to FireEye, SolarStorm compromised organizations across the globe via a supply chain attack that consists of a trojanized update file for the SolarWinds Orion Platform (see Figure 3).

SolarStorm specifically targeted supply chain operations for SolarWinds’ Orion project, singling out their IT performance and statistics monitoring software. From there, SolarStorm threat actors modified the legitimate and digitally signed .dll file, SolarWinds.Orion.Core.BusinessLayer.dll. This .dll behaved as a SolarWinds Orion plug-in which was opened by the SolarWinds process, SolarWinds.BusinessLayerHost(x64).exe. The .dll file, having now been digitally signed, was added to the legitimate HotFix #5 package for SolarWinds Orion (CORE-2019.4.5220.20574-SolarWinds-Core-v2019.4.5220-Hotfix5.msp). The embedded “legitimate” .dll file essentially became a trojanized software supply chain technique. Once the supply chain infection was propagated to SolarWind customers, it provided backdoor access to infected environments. The backdoor operations went largely unnoticed, from as early as March 2020 when the HotFix was first released, as the C2 traffic masqueraded as legitimate Orion Improvement Program traffic.

How to Mitigate Attacks on the CI/CD Pipeline

In order for other organizations to combat and remediate the actions taken during this red team exercise, Unit 42 recommends the following steps:

Scan containers and IaC templates for misconfigurations and vulnerabilities throughout the development cycle.

Implement drift detection across all IaC and container images.

To learn more about what our red team exercise revealed – and how to protect your cloud infrastructure – download the Unit 42 Cloud Threat Report, 2H 2021.

The post The Anatomy of an Attack Against a Cloud Supply Pipeline appeared first on Palo Alto Networks Blog.